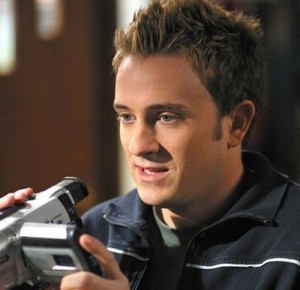 In “Buffy,” Andrew Wells (played by Tom Lenk) appears in Season 6 first as one third of an wannabe-evil trio of nerds — also comprised of Jonathan and Warren — who want to become “criminal masterminds” and rule Sunnydale like in comic books.

Andrew is an expert at demonology through being able to summon demons and recreate extent species through genetics. His brother, Tucker, had similar abilities and had sent hell-hound dogs to attack the senior prom in Season 3 that were stopped by Buffy. (Andrew also tells Warren that he had sent flying monkeys to attack the school play, but this incident is never shown.) Later, Andrew became friends with Jonathan and Warren.

As The Trio, the three engage in petty crime including the stealing of items from the Sunnydale Museum, the creation of rays that freeze people or render them invisible, and they cast spells on Buffy to annoy her mildly. Andrew and the others often discuss topics that are stereotypically associated with nerds like “Star Wars” and computers.

By the end of Season 6, Andrew and Jonathan grew wary of Warren, who had killed his ex-girlfriend Katrina and had become much darker in his ambitions. After Warren almost kills Buffy and does kill Tara with gunshots, a sad and angry Willow seeks revenge and kills Warren before then setting her sights on Andrew and Jonathan, both of whom had been largely innocent. After Buffy successfully protected them, they escaped to Mexico.

In Season 7, the two return to Sunnydale with the intention of paying for their crimes. However, Andrew had been under the manipulation of The First. While they find an evil seal in the basement of the new Sunnydale High School, Andrew stabs and kills Jonathan under the orders of The First, who had been appearing to him in the guise of Warren. Soon, Andrew is seen by Willow, who takes him to Buffy’s house before holding him prisoner. Over time, Andrew realizes how much pain and trouble he has caused, and the Scoobies begin to trust him — Andrew even tries to film a documentary about Buffy and the potentials to tell the world about what they had been doing to save it. Andrew joins the Scoobies in the final battle of the series, and Anya sacrifices her life to save him.

Andrew in the “Buffy” Comic Books

Andrew’s role in the fight against evil continues in the “Buffy” Season 8 and Season 9 comic books — but we will not spoil you by telling the rest of his story here.