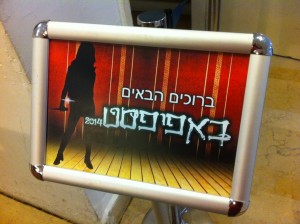 Editor’s note: Want to contribute a guest essay to our blog? Contact us.

TEL AVIV, Israel — “Being a teenager sucks wherever you are.”

So replied 16-year-old Mayaan Shir, one of the volunteers at BuffyFest — the annual convention in Tel Aviv that occurred last Thursday evening — in response to a question on why an Israeli high-school student would like the American cult-television program “Buffy the Vampire Slayer.”

Shir had been helping with the ticket table at the convention, which is sponsored by The Joss Whedon Community of Israel (website/Facebook page). The group organizes and holds events such as BuffyFest, Hallowedon (lectures followed by a costume party with music by a Tel Aviv DJ), and a screening of the Israeli premier of Whedon’s “Much Ado About Nothing.”

Roughly fifty people of all ages attended this year’s BuffyFest: 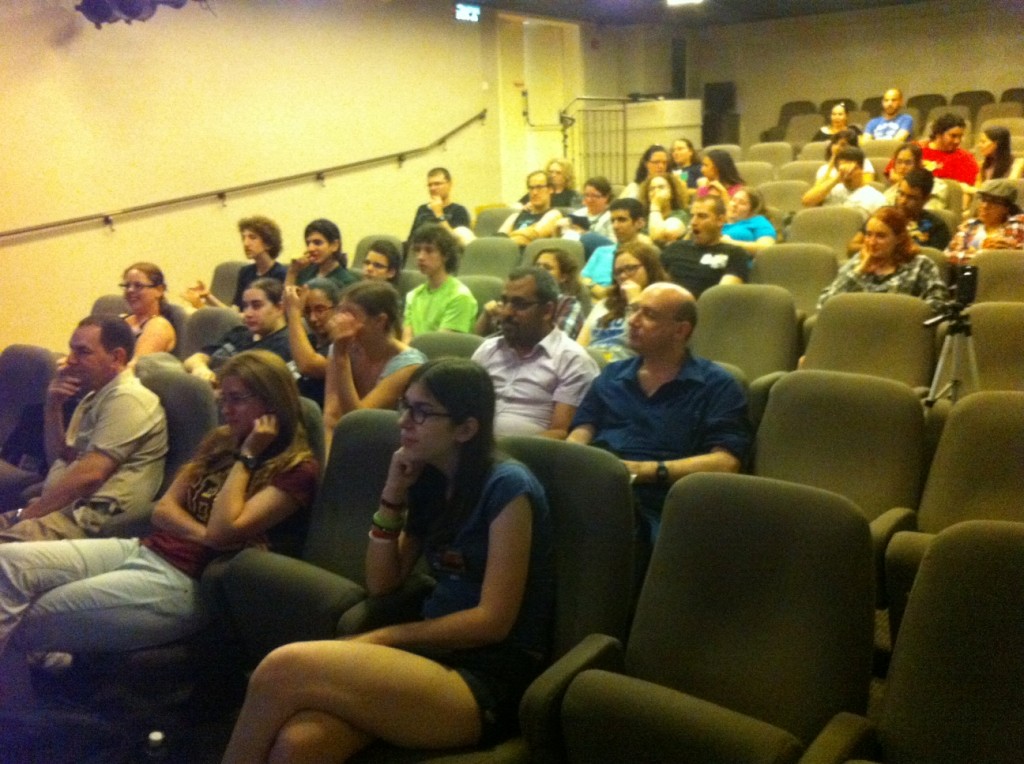 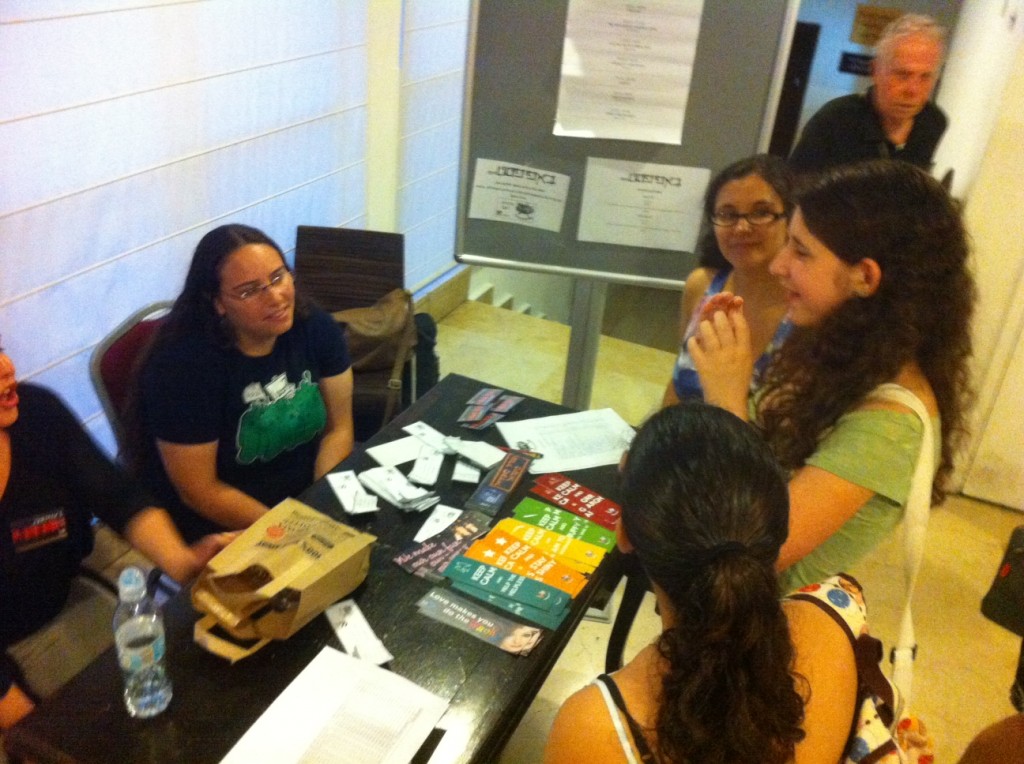 My personal impression, which I was pleased to see, was that older “Buffy” fans were imparting their love of the 1997-2003 show to a “new generation” of fans. Shir, for example, said that people her age are already active in other fandoms such as “Doctor Who” or “Star Trek,” and then people tell them that they should also check out “Buffy,” “Firefly,” and more. And it goes from there.

The 2013 Buffyfest, which I covered here, was the first “Buffy” convention in Israel and is partially funded by the Israeli Society for Science Fiction and Fantasy. This year’s six-hour event cost NIS 90 (roughly $26).

“Last year, BuffyFest was just a project, an idea — we made it happen,” co-organizer Vardit Gresler said in an interview before the conference began. “We established the Whedon Israel community. We reached all the people who love Buffy. Now, our goal is to target new people to make them watch ‘Buffy’ and all of Whedon’s work and talk about it and give lectures about it.” 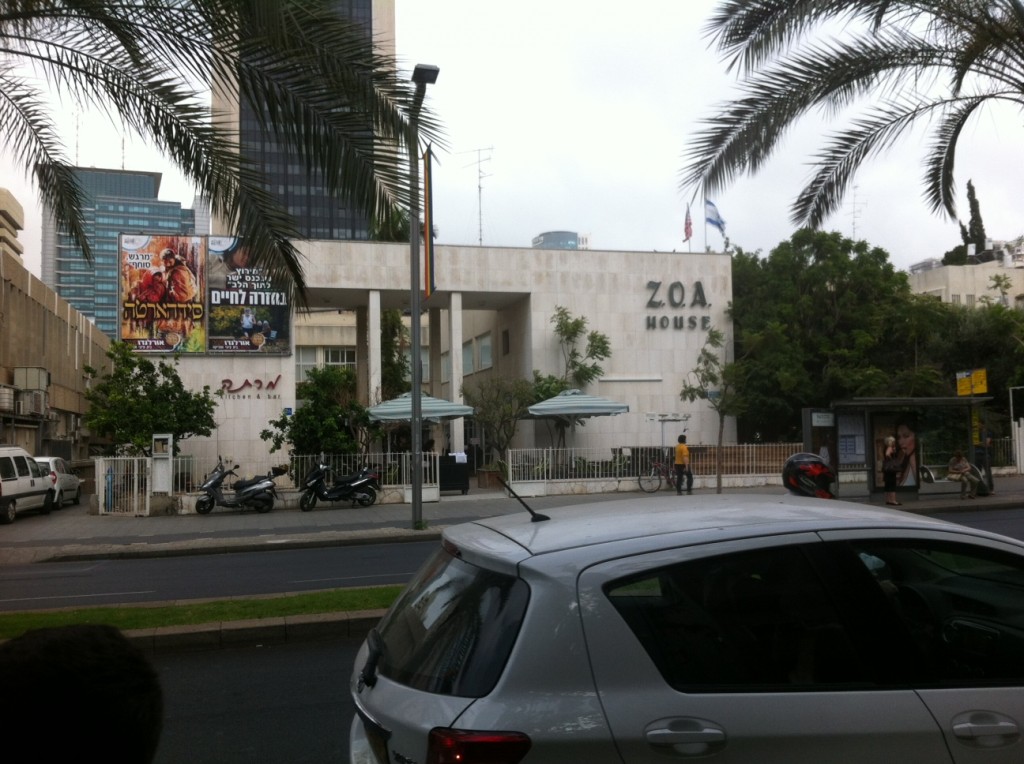 After the doors opened at 4 p.m. at the Zionist House of America, a conference and event hall in central Tel Aviv, Klil Lifshitz, a self-described “Buffy” enthusiast for eight years, began the conference by speaking on why “Buffy the Vampire Slayer” has become a borderline addiction for so many fans in a way that has made BtVS much more than a television show (and now a comic-book series). She summarized:

“It’s because of the infrastructure of ‘Buffy’ as a TV show,” she said in an interview. “It has so many elements that make people go bonkers.” 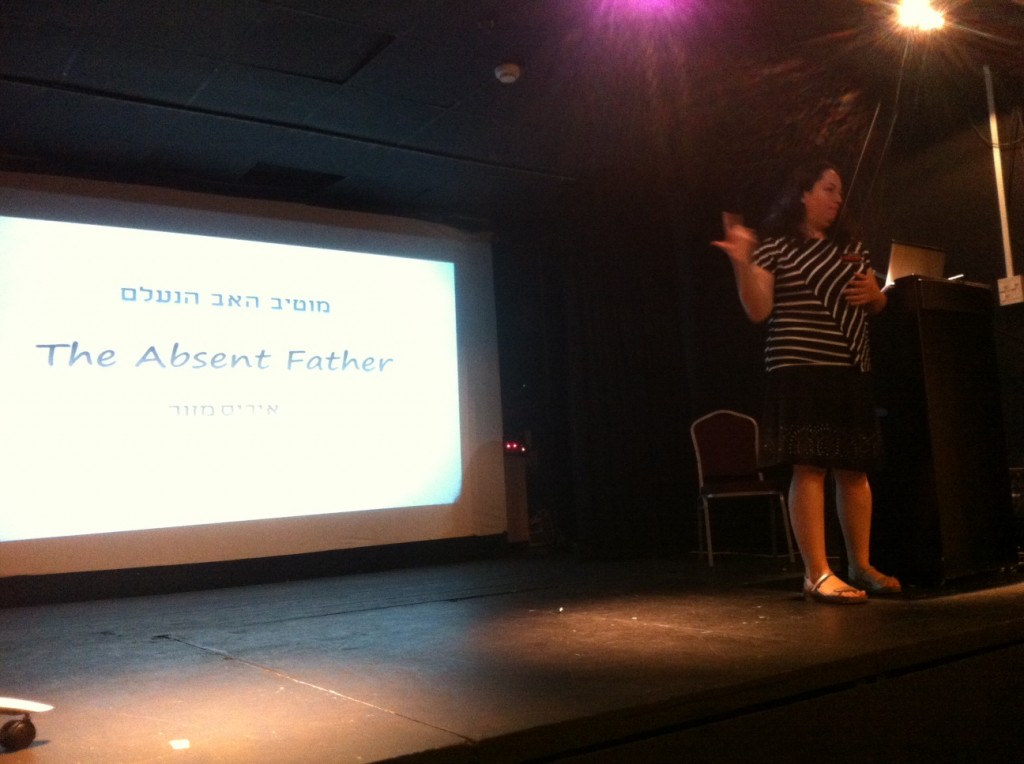 After a break, Iris Mazor, who has a B.A. in English literature and history and also loves “Star Trek,” discussed the absence of father-figures in much of Whedon’s work from his writing on “Roseanne” in 1988 to directing “The Avengers” in 2012. Most of the talk focused on the portrayal of fatherhood in “Buffy” and “Angel,” and Mazor described three reasons for Whedon’s downplaying of fatherhood: 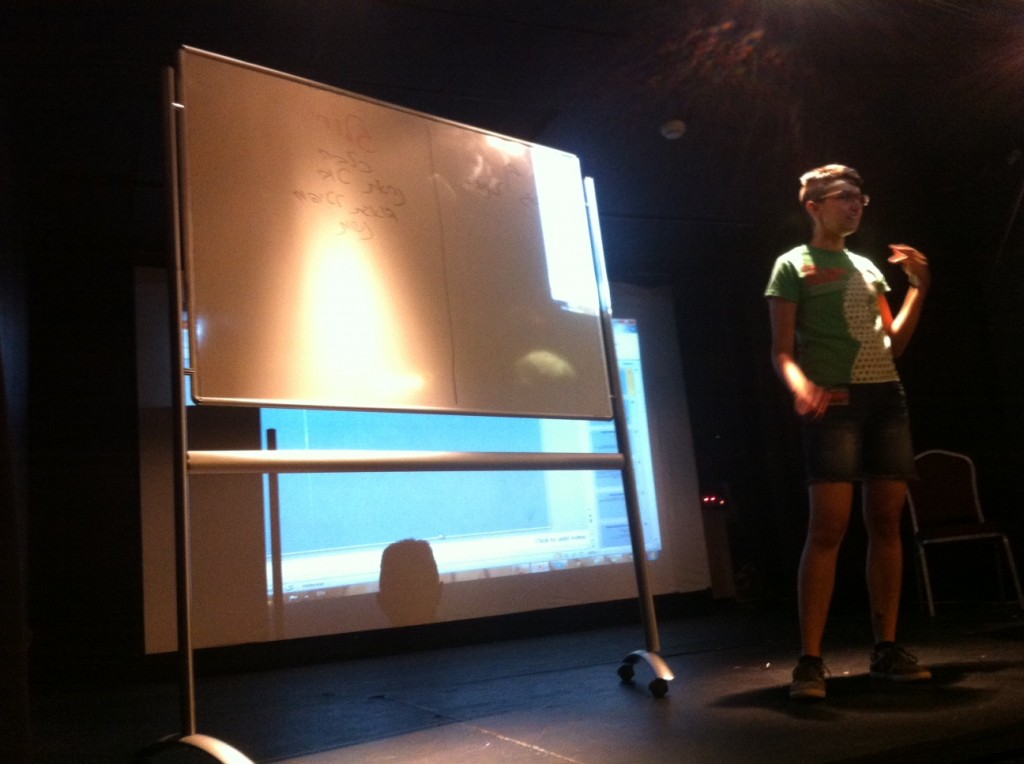 Then, Jen Shuka, who has a degree in psychology and sociology and is a part-time feminist/queer comedian, discussed the gender and other aspects of the Ben/Glory dichotomy while using a whiteboard and clips from Season 5. There are two entities within one body, Shuka said, and she explored masculinity and femininity, performance and identity, madness and normality, and how these ideas are reflected in Ben and Glory. Later, she said in an interview that Ben and Glory started out as polar opposites, but Ben had become just as evil as Glory by the end of Season 5. (My thought: This perhaps partly justifies and excuses Giles’ killing of Ben in the season finale.) 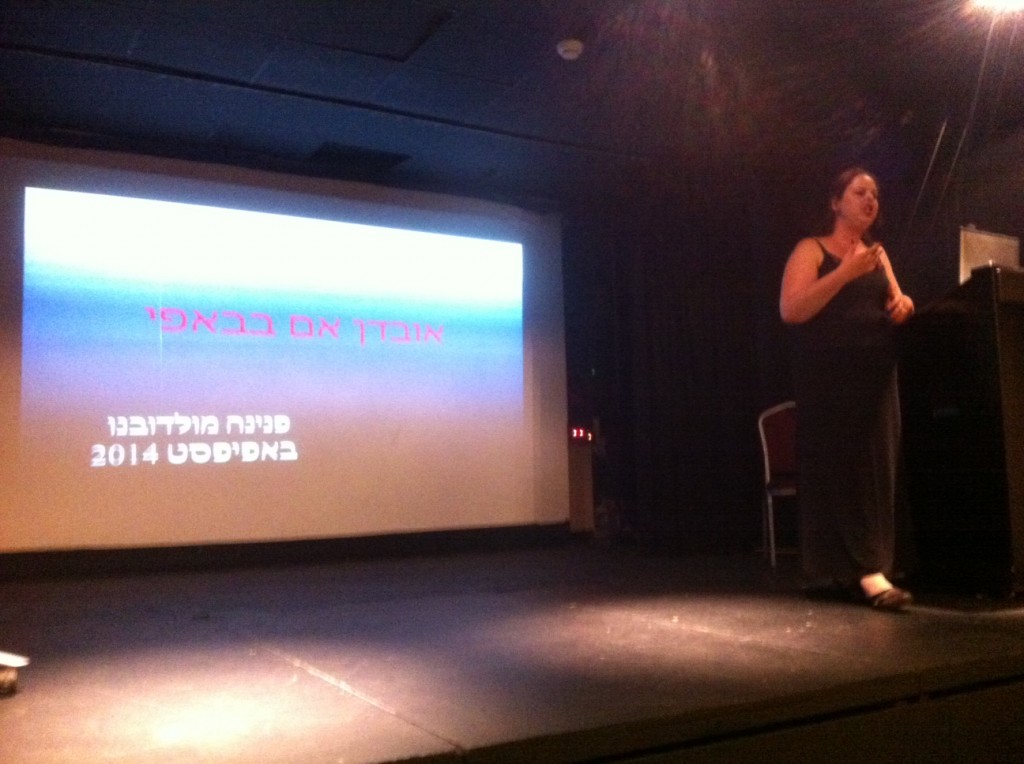 Next, Pnina Moldovano, a well-known speaker and activist, examined the death of Buffy’s mother and how “The Body” and the following episode looked at the grieving process and how it is experienced by people who have lost someone as well as their friends and loved ones.

“Grieving is a universal process, and there are certain stages… but at the same time, it’s an individual process, and it is expressed personally and individually,” she said in an interview. 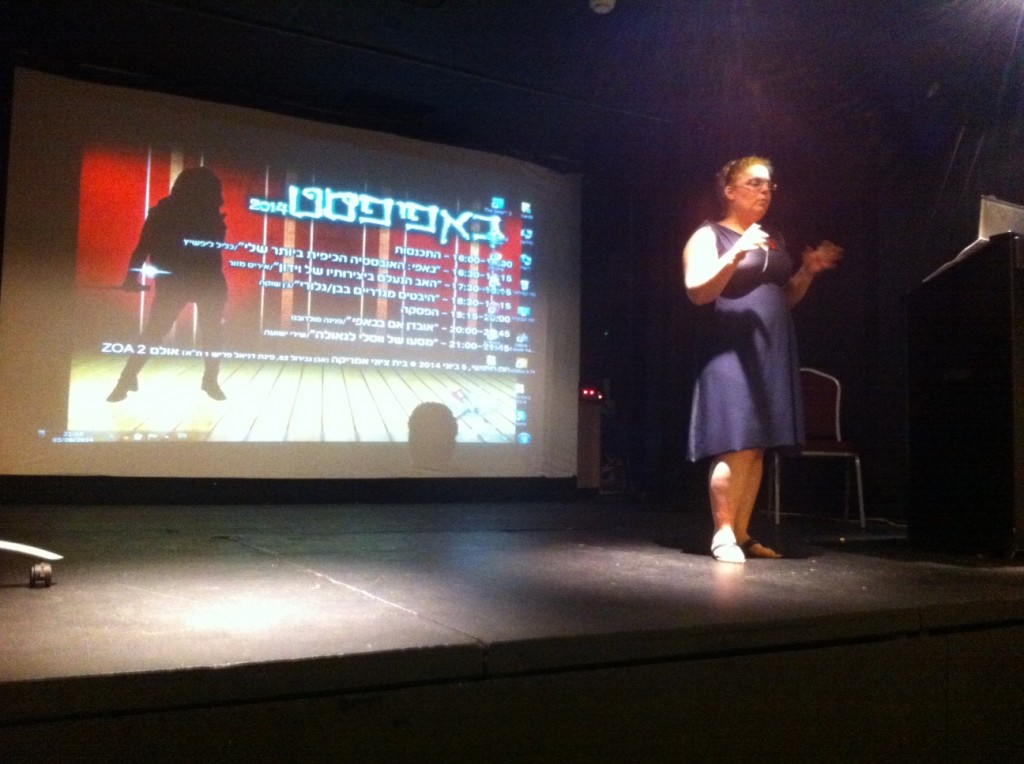 Last, Shiri Yeshua gave a presentation on Wesley’s character arc in “Buffy” and “Angel” — including what she described later as his failed attempt to obtain redemption before he died. “I discussed how deeply depressing Wesley’s journey is,” she said in an interview. “My opinion is that he’s very tragic, and he didn’t get the redemption he was looking for. I hate that he died.” 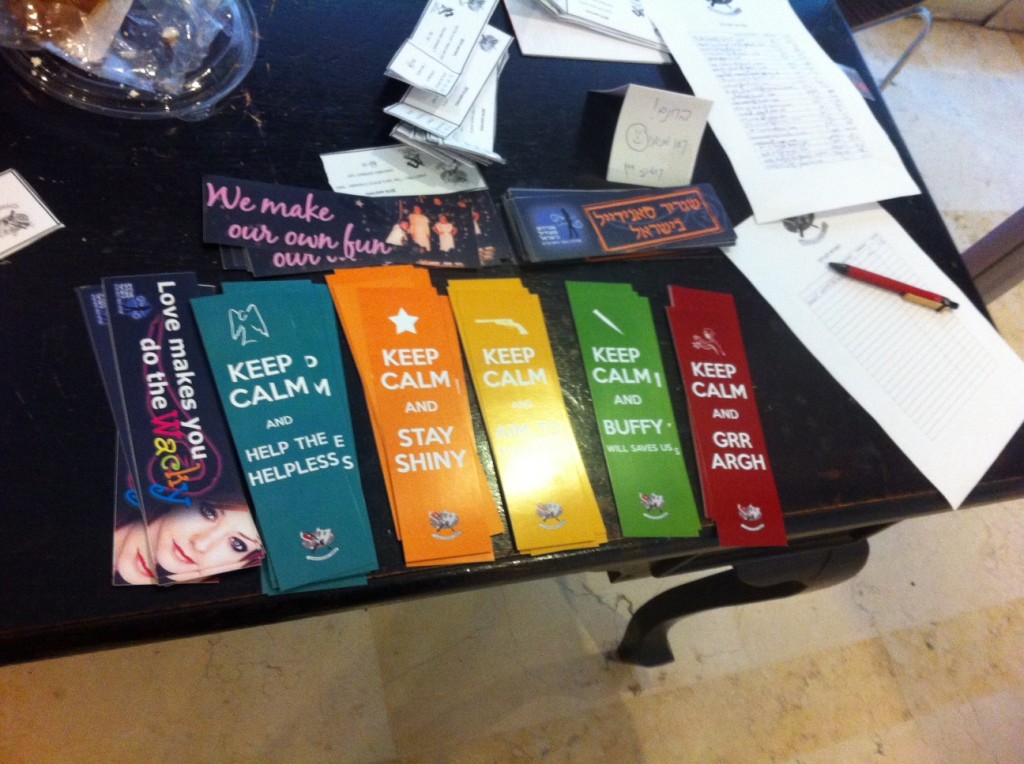 A few days before the event, Lifshitz discussed Buffyfest in a segment entitled “The Hellmouth Opens in Tel Aviv” (start at 16:00) on TLV 1, an English-language radio station:

“At first we thought not many people would show up, but eventually there was a full house,” she said. “It was fun to get all those people together because sometimes “Buffy” fans can feel a but isolated… the show has probably one of the silliest titles of any show that ever aired on television. So, when you watch “Buffy the Vampire Slayer” and realize that it’s the most amazing show ever, it can be hard to explain why.”

“I think the show deals with subjects that are not bound by time; it deals with so many personal issues,” Lipschitz continued. “It’s really easy to go into the show and see things that you can relate to even after 2003 [when the program ended]. There’s been a resurgence of interest in all of [Joss Whedon’s] works [after “The Avengers”]. People are rediscovering “Buffy” — [even] eighteen-year-old kids who were barely alive when the show first aired!”

On why “Buffy” interests its Israeli fans specifically:

“I don’t think it’s related specifically to Israel. Well, it does. It’s a country that has a lot of conflict in different areas of life. [But] I think people relate to “Buffy” here just as people in any country relate to “Buffy.” And that’s why it’s amazing. You hear the universal subjects that are dealt with on the show.”

Gresler added similar thoughts in the earlier interview. Since I was born and raised in the United States, I was exposed to a lot of Christian symbols and themes despite being Jewish. I asked Gresler how Israelis react to the Christian elements that Whedon inserted into the show (despite being an atheist) such as Buffy being perceived as a “messiah” figure who dies to save the world.

Vardit, a chemist in her day job, replied by saying that non-Christians or secular people can relate to some of the “scientific” ideas in “Buffy” such as Willow’s discussion of magic later in the show on how something cannot be created from nothing and that energy is neither created nor destroyed.

“We had a couple of jokes about what ‘Buffy’ would do with a Jewish vampire,” she then added. “I think a cross would work on a Jewish vampire if the slayer is a Christian — you have something that protects you if you believe in it. We understand the [Christian] references. It doesn’t matter what religion you follow; the overall themes are universal.”

One reply on “BuffyFest Israel 2014 Coverage”

I agree with Jen Shuka on Ben’s being evil and have made the same agrument as the blogger, evne in aletter to the old Buffy magazine. The sue of crosses or anything else against a vamp was never defined by Whedon, although its workign by the beleif of the wielder still works, evne tho Whedon vamps aren’t empathic creatures. D’C’A’