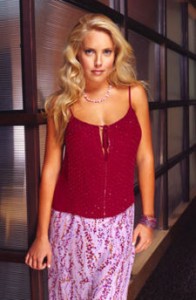 In Buffy, Harmony Kendall (portrayed by Mercedes McNab) was a spoiled, stupid, teenage girl at Sunnydale High who was part of Cordelia Chase’s circle of friends. In one of her first appearances, she discusses how to create a computer program in a computer class before Willow, after being insulted by them, tells the two a piece of advice that actually causes them to erase all of their work “accidentally.”

For three years, she remains the same way and even makes fun of Cordelia after she starts to date Xander Harris in Season 2. Still, during the epic battle during graduation at the end of Season 3, she is bit by a vampire and then turned into one of them. When Harmony reappears in Season 4, she is still the same superficial person — albeit in a vampire form that has begun dating Spike. For two years, she dates him off and on, making her last appearance in Season 5 as she forms her own vampire force and then becomes embroiled in a Buffy-Drusilla-Spike love triangle after Spike had begun to fall in love with the slayer.

Eventually, she moves to Los Angeles, tries to befriend Cordelia again despite her vampire transition, and begins working for the evil law firm Wolfram & Hart (and thereby having a re-occurring role in the “Buffy” spin-off) and becomes Angel’s personal secretary after he becomes CEO. Harmony, after dealing with the politics of the firm and almost getting killed herself), betrays Angel and sleeps with the new liaison between Angel and the Senior Partners as “Angel” draws to a close. However, her story does not end there — since Angel sends her away without killing her while giving her a letter of recommendation following her work there.

Harmony’s story continues in the comic-book series following the end of the “Angel” television series, and she remains a player in the Buffyverse to this day.

Harmony After the “Buffy” Series