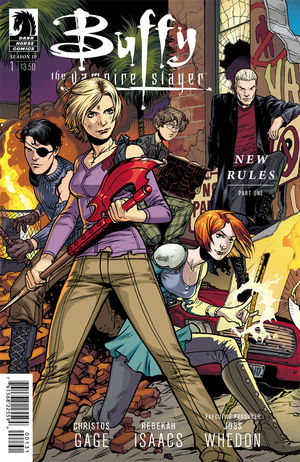 For those who have not already stormed their local comic-book stores, Dark Horse has released the first issue of “Buffy” Season 10! Amazon is scheduled to release the first trade paperback in November.

Entitled, “New Rules,” the first part of the new season begins where Season Nine left off:

In the beginning of Season Ten:

[“Buffy” creator] Joss [Whedon] did reiterate [at a summit meeting] what he said prior to Season 9, which was that in Season 8, they had really leaned into the freedom of the comic book format and scaled things super-big, and in Season 9 we’d brought the focus more back to the characters. He wanted to continue that focus, even increase it. There was a general agreement that we didn’t want another looming apocalypse — we were kind of apocalypsed out for a bit… Through the magic of comic book timing, the characters aren’t the same ages as the actors, they are mostly in their early to mid-twenties. They have left college, or the immediate post-high school phase of their lives, and are entering adulthood. Season 9 examined that to a point, and I plan to keep doing so.

For more information on the season (again, spoilers!), you can also read a Q&A with Gage here and another with “Buffy” artist Rebekah Isaacs here. (They were “promoted” from “Angel & Faith” to “Buffy”!)

In other news, Nicholas Brendon, who played Xander in the television series, will be writing one arc of Season Ten. James Marsters, who played Spike, is also writing a graphic novel that features the character.