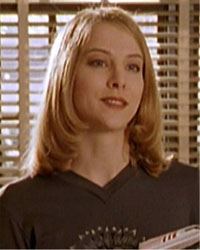 In “Buffy,” Amy Madison (played by Elizabeth Anne Allen) is a student who is first seen in Season One trying out for the cheerleading squad and failing miserably. Buffy and the Scoobies realize that Amy’s mother is a powerful witch who had switched bodies with her high-school daughter to relive her “glory days” as the head cheerleader and most-popular girl in school.

Later in Season 2, Amy has seemingly gained her mother’s powers when Xander sees her using magic to convince a teacher that she has handed in an assignment when in fact she had done nothing at all. So, Xander, who had just been dumped by Cordelia on Valentine’s Day, blackmails her into performing a love spell to get Cordelia back — but one that goes awry and imbues all women with murderous bloodlust for him.

In Season 3, after Willow has begun studying magic, Amy, Willow, and a third student form a small coven that is trying to stop the killing of local children by a demon. However, the teachers and parents in town — under the influence of the demon — think that they are culpable and almost burn Amy, Willow, and Buffy at the stake. At the last minute before Buffy saves the day, Amy transforms herself into a rat to escape the ropes — a form that she assumes while housed in a cage at Willow’s house until Season 6.

After Tara breaks up with Willow for using too much dangerous magic in Season 6, Willow realizes how to change Amy back from rat form. After regaining her human form, Willow and Amy decide to party out on the town, using even more and more dark magic. Willow, after realizing the extent of her magic addiction, warns Amy to stay away from her because Amy had become an evil enabler.

In Season 7, Amy has become jealous of Willow since her magical ability had surpassed hers, so she casts a spell to turn Willow into Warren — the man she had killed at the end of Season 6 after his accidental shooting of Tara — after kissing potential-slayer Kennedy on a date. After the conclusion of the episode, Amy is not seen again. But will she appear in Season 8 of the “Buffy” comics?