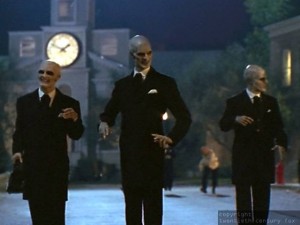 “Hush.” A group of demons known as the Gentlemen arrive in Sunnydale and cast a spell to steal the voices of everyone in the town so that they cannot speak or verbalize any sound. And then that’s when their true demonic plan begins. Buffy and the Scoobies must figure out who the enemies are, how they stole everyone’s voices, and how they can be defeated. Meanwhile, Buffy and another character first discover that there is more to both of them than they had each realized. “Hush” is a critically-acclaimed episode that has been seen as one of the most-creative hours of television (and not just of “Buffy”), with all of the actors communicating non-verbally throughout most of the episode and all of the other noises providing that much more dramatic effect and meaning. (Original air-date: December 14, 1999)