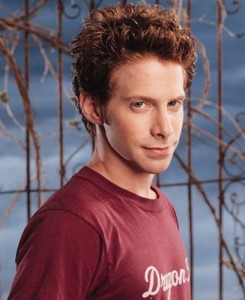 Daniel “Oz” Osbourne (Seth Green) is a computer genius who also plays guitar in a pop band (Dingoes Ate My Baby) that performed at The Bronze and at locations at the University of California at Sunnydale. He is a person who speaks little but whose few words are always either extremely witty or even philosophical. Oz first appeared in Season Two, when he later began dating Willow, and soon turned into a werewolf after being bitten by his baby cousin.

In Season Four, he breaks up with Willow out of concern for her safety in light of his alter-ego. Later that same year, he returns to UC Sunnydale only to see that Willow had become a lesbian and had started to date Tara. After they agree that they will always have a personal connection, Willow and Oz agree to part ways and then Oz leaves again for good. The character’s last appearance in “Buffy” was in Willow’s dream sequence in the finale of Season Four.

Oz first appears the Season Two episode “Inca Mummy Girl,” when his band plays a Sunnydale High School multicultural dance. He is intrigued when he sees Willow in the crowd dressed as an Eskimo. While driving down the street in the episode “Halloween,” he sees Willow walking down the street as well. The two first meet in the two-part episode “What’s My Line” when the two are recruited by a software company after taking a test for Career Day.

Soon, they begin dating, and Oz sees Buffy slay her first vampire at her birthday party in the episode “Surprise.” Oz joins the Scoobies, contributing research and occasionally fighting. Oz and Willow become serious, and the two sleep together — in what is Willow’s first time — in the two-part Season Three finale “Graduation Day” since they fear that they might be killed by the evil, Sunnydale mayor.

Once everyone goes to UC-Sunnydale in Season Four, Willow and Oz continue to date. However, he becomes intensely attracted to Veruca, a singer in a band who, as we later find out, is also a werewolf. Oz locks her in his cage over the full moon to prevent her from killing people. The two have sex after they turn into werewolves, and Willow sees them naked and unconscious the following morning. The following night, Oz kills Veruca when they are werewolves, and then he attacks Willow. After the full moon is over, Oz leaves a tearful Willow because she will never be safe around him.

Later, Oz returns to Sunnydale after, as we learn, traveling to Tibet to learn how to stop the werewolf from emerging using herbs, chants, and his own willpower. But by that point, Willow had begun dating Tara. Oz turns into a werewolf again and attacks Tara in anger, and he decides to leave Sunnydale for good once he turns human again.

Oz Later in the Show

Does Oz return in the Season 8 and 9 comics? We will not write any spoilers. Still, here are links to the rest of the show’s story: