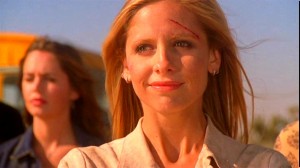 The author has wished to remain anonymous.

The big difference between me and Buffy is that I was always a slayer. I wasn’t “called” or “chosen” – I was born into the violence and the suffering. But if I were to pick a moment when I knew I was different, it would be a little under two months before my fourteenth birthday.

My parents were going through their divorce at the time, and that is pretty normal. But my dad, he went psycho – not that he wasn’t a little bit already, but then he started talking about sacrificing me to God and molesting me. I eventually pressed charges. I didn’t turn to drugs or sex – I just kept trying to be good. I kept thinking that maybe if I kept being good, someday good things would happen – because, well, my life so far had been hell. I guess living in a Cinderella, karmic mind-frame helped me to cope.

My mother soon re-married – and, well, so entered another villain. His pathological lying contorted my mother, who was super desperate to be loved. It came down to months of her telling me to quit school and become a prostitute because even though I was basically a virgin despite a rape that happened at fifteen, and my stepfather kept telling her that I was “giving it” to everyone.

I spent as much time as I could quietly hiding from him and his yelling – often times spending whole weekends in my bedroom pissing into cups so I wouldn’t have to see him. I guess I was a coward, but the court battle was all the fight I had in me. And then, having to face all the kids at school who didn’t like me – well, I just couldn’t take anything else. My stepdad gave my mother the ultimatum: me or him. She gave me the choice of her killing herself if I stayed or moving out. Not really much of a choice.

I guess I should mention that I’m the youngest child in my family. At sixteen, I left to live with my most-psychotic sister because one sister didn’t have the room or the money for an extra person, let alone her own kid, and another was married to a complete pervert. So, I went and lived with the sister who came in at night, waking me up with punches and yelling.

I lived there for six months, and while I never hit back, I was not allowed to use the furniture or eat the food in the house. A plum tree grew in the back yard, and the outside of the fruit was almost black but inside was a golden sweetness that has left every other plum bitter with envy.

Winter came, and my diet went to eating out of trash cans and dog food. I was the “new girl” and had no one in whom I could confide. I was so alone. On my way to school one day, I blacked out and spent my early-morning, ballroom-dance class passed out in the snow. I did get to school after a car horn woke me up.

I kept losing consciousness in classes, and my grades went from As to Fs – being beaten and starved will do that to a girl. After school, I had a full time job at a restaurant. I guess I could have eaten the food from the plates as I bussed the tables, but even starving, I couldn’t bring myself to steal. My vampires were creeps who waited outside for me or followed me as I tried to get home. I got smart real fast on not taking the same routes to school or home from work.

Well, with all of this stress, I forgot to change the laundry or take out the trash, and so my wonderful sister who – in addition to throwing things at me and hitting me – began telling everyone how ungrateful I was. Eventually, more family came to visit to tell me what a horrible, ungrateful burden I was.

Well, I broke down and snapped. I decided to let the light rail pop off my head after school. I guess had I wanted to see everyone one last time. My dad was giving me driving lessons on the way to school, but despite having a driver’s license, I did not know how to drive.

A brief interlude while I explain about Daddy not being in jail.

I didn’t want my dad to go to jail. Even though he spent years throwing me down stairs and such, even though he beat one of my sisters so hard that he gave her brain damage, even though he broke another’s tail bone and gave her many other injuries, he was the good parent. I was never in any danger from my mom – not physically, at least – but her idea of a good babysitter was one who had every sick and twisted fetish. When my dad walked in on anything like that happening to his kids, the perps got flung across rooms.

My dad is kind of like the Hulk. Make him mad, and there is nothing he can’t do. So, yeah, he went crazy and reached out for love in an inappropriate way, but he loved me but mom, well, she is incapable of that. She isn’t a bad person. It’s just that compared to her upbringing, mine was idyllic.