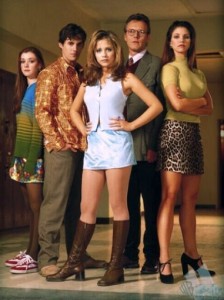 The transition from junior high-school to high school is difficult for anyone — and it is even harder when the person happens to be a vampire slayer.

In the series premiere of “Buffy the Vampire Slayer” entitled “Welcome to the Hellmouth,” Buffy exhibits many of the behaviors and difficulties that come from the adjustments to high school, and it is conceivable that the events of the show — which, of course, always uses metaphors extremely well — may even be instructive to educators, psychologists, and the students themselves.

A report by the National High School Center states:

Students’ experiences in their first year of high school often determine their success throughout high school and beyond. However, more students fail ninth grade than any other grade…

…the first year of high school is pivotal… the transition into high school is often characterized as a time when students experience a decline in grades and attendance (Barone, Aguirre-Deandreis, & Trickett, 1991)… school systems must support first-year high school students…

Compared to their perceptions reported the previous year, ninth graders perceive less support and monitoring from teachers and principals and generally like school less than they did in middle school. On average, ninth graders report being less involved in school activities and perceive the need for more school organization. They also indicate lower self-esteem and higher rates of depression than middle school students (Barber & Olsen, 2004)…

Although moving from middle school to high school can be a very exciting time for students, the transition is filled with great anxiety and stress for many adolescents (Hertzog, Morgan, & Lena, 1997). Substantial research literature has emerged documenting the fact that the transition into high school is marked by increased disengagement and declining motivation, particularly for low-performing youth (National Research Council, 2004).

An article in the Middle School Journal adds:

Studies that have included students’ thoughts and feelings about moving into high school reveal that eighth grade students are both excited and concerned about going to high school. They look forward to more freedom, more choice, the opportunity to participate in more extracurricular activities, and the opportunity to develop friendships. However, they also admit to being “nervous” and “scared” about older students teasing them; getting lost in their larger, unfamiliar school; and making bad grades (Cognato, 1999; Maute, 1991; Mizelle, 1995; Phelan, Yu, & Davidson, 1994; Wells, 1996). They are concerned that high school teachers will be more strict and that teachers will give them much more and much harder work than they had in middle school.

From studies like these, it is clear that high-school freshmen often have these problems and exhibit these trends:

While Buffy was a sophomore in Season One and was probably in the same grade during the prequel film, this thought-experiment is still relevant because the experience of transitioning to a new school in an unfamiliar town is extremely similar to that of being a freshman in high school. The Slayer, in fact, exhibits many of these issues in the early episodes of “Buffy.”

When we first meet Buffy, she awakes in a still-disorganized bedroom in her and her mother’s new home in Sunnydale, California. After a night of bad dreams about vampires, she wakes up. When her mother calls out and says that she doesn’t want to be late for her first day of school, Buffy apprehensively says “No, don’t want that.” Evidently, Buffy is generally stressed about her first year at (a new) high school. It surely did not help that the last thing Buffy’s mother tells her after dropping her off on her first day was, “Honey, try not to get kicked out.”

In addition, some of Joyce’s comments — though certainly not the majority of them, since she is almost always supportive of Buffy — could have seemed condescending in a way that did not help her daughter’s confidence:

During her initial meeting with Principal Flutie, he looks at her file while saying, “Buffy Summers… interesting record. Quite a career.” He tells Buffy that she has a “clean slate” but then retapes her file when she sees that she had burned down the gym at her old high school (because of vampires). Principal Flutie says her that her transcripts are “colorful” and then slaps the file closed while stating “if your needs and our needs don’t mesh…” In this situation combined with most of her teachers thinking that Buffy is “a felon” (in Willow’s words), it is clear that most of Buffy’s high-school teachers — barring her short-lived biology teacher in the Season One episode “Teacher’s Pet” and the school psychologist in Season Three — were indeed not supportive of her. Principal Flutie also catches her trying to skip class (for slayer duties), and understandably keeps her on campus.

The first year of high school is also stressful because students, as I mentioned earlier, are scared that they will be teased and not make any friends. Buffy’s initial attempt to make friends is less than successful:

In two statements to Giles and one to a vampire, newly-arrived Buffy reveals her main anxieties — and they match what experts have often observed in people during their first years in high school (emphasis added):

Buffy, in yet another symptom of a lack of first-year acclamation to high school, never gets involved in extracurricular activities (except slaying, of course, and the fictional “crime club” in one episode of Season Two). Her one attempt — joining the cheerleading squad in Season One — ends in witchcraft, partial immolation, and paralysis. In short, Buffy Summers is indeed the model of an at-risk student — as described earlier — because of her violent tendencies, poor grades, and related characteristics.

Of course, the viewer may excuse her behavior and condemn the attitudes of parents, principals, and teachers towards her because the viewer will know the subtext — her duties as a slayer. However, neither her parents (at first), principles, and teachers knew about her dual identity. So, as a result, the question must be asked: Were their often-negative attitudes towards Buffy and efforts to punish and “keep her on a short leash” perhaps understandable and commendable in light of the help that first-year high school students need? (An article of psychologist Steven C. Schlozman, M.D., who has written about using “Buffy the Vampire Slayer” in adolescent psychology, may offer some insight.)

I invite your comments below. The next essay on our blog will examine Buffy’s behavior as a college freshman in the psychological context of young people at that time.