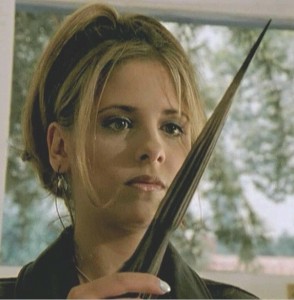 “Some prophecies are a bit dodgy. They’re mutable. Buffy herself has thwarted them time and time again, but this is the Codex. There is nothing in it that does not come to pass.”

The definition of prophecy is two-fold – a prophecy, according to the Stanford Encyclopedia of Philosophy, contains one or both of the following: a foretelling of future events through supernatural means or the communication of divine will. (One does not always necessitate the other.) Within the universe of “Buffy the Vampire Slayer,” the nature of prophecy focuses on the former and raises interesting questions regarding the Buffyverse’s view of free will, determinism, and related themes.

First, we need to list the prophecies that were communicated in “Buffy” – for the purposes of this essay, I am excluding those in “Angel” – by either humans or demons (source):

Interestingly enough, all of these prophecies occur in Season 1 – when the themes and foes took on a mythic dimension rooted in prophecies from long ago. (Conversely, most, if not all, of the ideas and enemies later in the series were more focused on present-day causalities and not stemming from age-old prophecy.)

To understand the nature of prophecy and determinism in “Buffy,” it is important first to determine the sources of the prophecies. Giles, Angel, and other “good guys” quote the Bible and writings by humans. The Master and Luke quote writings that are either from unknown (and presumably evil) sources or from the vampire Aurelius. Second, it is crucial to understand that nearly all of the prophecies – from both the “good guys” and “bad guys” – proved to be accurate in their depictions of events to come:

(The only exception was the Harvest, which Buffy prevented from occurring in the second episode of the first season. The issue of the Slayer Prophecy in light of the events of the final episode is something that I will discuss later.)

As we can see, all entities in the Buffyverse, regardless of their good or evil intentions, have access to writings by people and demons that used supernatural means to foretell future events, whether good or evil, with an extremely-high degree of accuracy. This infers that some unknown entity (perhaps God and/or The First on each side) knows what is most likely to occur – but not definitely occur – in the future, and various people and demons have had been able to use metaphysical processes to ascertain and communicate that knowledge.

This fact is troubling in light of the age-old debate over free will versus determinism (religious or otherwise). Free will can be described as “the ability of agents to make choices free from certain kinds of constraints.” In the Buffyverse, are humans and demons merely predestined to act out prophecies, or do they choose to perform actions (or not to perform the actions) that will make prophecies come (or not come) to pass? If the former is accurate, then there is no free will in “Buffy the Vampire Slayer” because our aforementioned entity (or entities) has already decided what will occur. If the latter is true, then free will is still a major determinate in this fictional universe.

Perhaps for the better, it is clear that Joss Whedon’s world in “Buffy” seems to favor the latter, albeit in a certain context. All of the prophecies told by humans come to pass; not all of those told by demons occur (see the failed Harvest). This is evidence that demonic prophets are less accurate, and that the supernatural source of those evil prophecies – whatever it may be – cannot predetermine the events in the world with absolute certainty. In sum, the prophecies of the “good guys” cannot be thwarted and always come to fruition – but those of the “bad guys” can be deterred through free will and direct action. If one choose to place the Buffyverse in a western, Christian context, then it could be surmised that “good guy” prophecies come from an omnipotent, all-knowing, and all-powerful God while those from the “bad guys” comes from a Devil-like figure who is less-omnipotent, less knowing, and less powerful. (See a prior essay on the myth of Creation in “Buffy.”)

The best example, of course, is the second part of the Season 1 introduction. Buffy, along with her newly-assembled team of Scoobies, kills Luke, stops the Master from rising, and thereby prevents the Harvest from occurring. Prophecy – or, more accurately, the unknown source of that prophecy – does not constrain these active agents from preventing it from being fulfilled.

However, just because the prophecies of the “good guys” always come to pass does not mean that they cannot be changed. In the Season 7 series-finale (the Buffy episode “Chosen”), Buffy and Willow alter the prophecy of “one girl in all the world” to one that says all “potential” slayers will be “chosen” as well. As Giles states in Season 1, these prophecies are indeed “mutable.”

In the end, this shows that Buffy Summers was not only a slayer and teenage girl – she was a prophet herself as well.