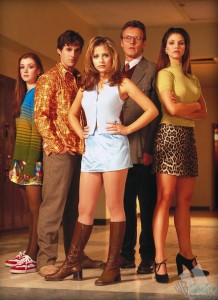 Twitter Live Chat: Why Are There No Female Superheroes?

Blogger Emmie Mears, Twitter user BtVSfan96, and BTVS Online founder and publisher Samuel Scott will host a live Twitter chat tomorrow on female superheroes and their portrayals (or lack thereof) in various fictional mediums. The hashtag will be #SuperWomen, and the chat will begin at 7 p.m. U.S. EST on September 20, 2012. Further chats will occur periodically in the future.

The purpose and topics will include:

Emmie Mears spends at least an hour a day preparing for or thinking about the zombie apocalypse. Future calamity notwithstanding, Emmie hunts stories in dark alleys and in stone circles and spends most nights listening for something that goes bump. She writes urban fantasy novels, but her blog covers many facets of fantasy, from superheroes to vampires to sorcerers. Emmie lives outside Washington, D.C. with her husband, a husky puppy who talks too much, and a tabby who thinks she’s a tiger. Mears’ website, Twitter, and Facebook.

Rebekah (@BtVSfan96) loves Buffy and anything Whedon-related, and she has always appreciated Joss bringing female superheroes to culture in fresh, witty ways. As a young woman, she sees the need for strong female rolemodels when she observes her peers. Rebekah believes that the world needs SuperWomen to show girls her age and younger (and older!) that women can be strong and independent — and she asserts that the key will be elevating women without seeking to put men down. And SuperWomen are a perfect way to teach that!

Buffy the Vampire Slayer Online is a top fan website created by Samuel Scott that is a complete resource for all aspects of the show along with a high-level, academic blog with funny graphics and essays on philosophy, theology, and more. Scott is a former Boston newspaper editor who now lives in Tel Aviv, Israel, and works in Internet marketing and public relations in his day job. The first episode he ever saw during Buffy’s original run was Season 3’s “Gingerbread” while in college, and he has been a fan ever since. BTVS Online’s website, blog, Facebook page, Pinterest, and Twitter. Scott’s personal website and online-marketing site.