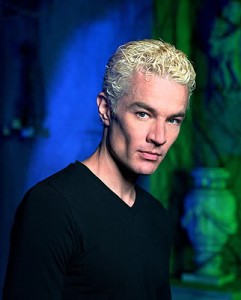 Spike is a vampire in the Buffyverse who is famous for killing two slayers and allegedly torturing his victims with railroad spikes. Prior to becoming a vampire, William Pratt was a mocked English poet known as William the Bloody (for his “bloody awful” poetry) who was ignored by women in the mid-nineteenth century. After Drusilla turned him into a vampire, he changed his personality and ravaged Europe in the nineteenth and twentieth centuries.

Spike and Drusilla arrived in Sunnydale in 1997. First he was a dangerous enemy in Season 2, but he soon formed an alliance with the Scoobies to stop Angel, as Angelus, from destroying the world. In Season 4, he was captured by the Initiative, a secret U.S. military operation to fight and neutralize demons, and given a chip that prevented him from harming humans. In the next season, Spike fell in love with Buffy and joined the Scoobies in the fight against evil in Seasons 5 through 7. At the end of Season 6, his love and past behavior inspired him to fight to regain his soul.

In the last episode, Spike gave his life to defeat the First Evil and destroy the Sunnydale Hellmouth. Still, Spike then became a ghost in Los Angeles branch of Wolfram & Hart as a result. After regaining a physical form, Spike joined Angel to fight the Senior Partners.

Buffy, Spike, and His Biography

William Pratt was born in the 1850s in England, and when he was around 30 years old, he was a mocked “gentleman” who lived with his mother and an aspiring poet. William was lampooned as “William the Bloody'” behind his poetry was viewed as “bloody awful.” When his nice-guy, romantic poems were insultingly turned down by a woman, William decided to walk on the streets. He met Drusilla, a vampire, who turned him into one as well.

Excited about his supernatural abilities, William adopted the name “Spike” (but in a sinister way) and became a rebel With Drusilla, Angelus, and Darla, Spike terrorized the world for years.

Spike arrived in Sunnydale with Drusilla, who had been almost killed in Prague. He took care of Drusilla and had thought that the Hellmouth would heal her. Spike and Drusilla battled Buffy and Angel, but the former two joined with Angel as Angelus when he had lost his soul. Still, when Angelus found a way to destroy the world, Spike joined forces with Buffy because he loved the worldly pleasures of Earth too much. Later, after Buffy had defeated Angelus and Drusilla had dumped Spike, he returned to Sunnydale. Eventually, the Initiative captured Spike and implanted him with a chip that made him unable to harm humans. Spike, realizing that he could still harm demons, eventually joined the Scoobies because he wanted to attack something.

Later, after complicated story-lines, Spike fell in love with Buffy to the point of even having Warren make a robotic simulation of her. When Buffy dies in the battle with Glory, Spike is depressed and joins the Scoobies to remember her. After Buffy is resurrected, she and Spike become lovers partly because Buffy is lonely and despondent at being taken out of Heaven. Spike becomes obsessed with Buffy and attempts to rape her. After he is disgusted by his own behavior, Spike leaves, travels the world, and regains his soul through various trials and tribulations.

In Season 7, Spike fights evil with Buffy after the First Evil’s control over him is cut. In the final battle, he sacrifices himself to destroy the Hellmouth and save the world. As a result of the mystical way in which he died, Spike is returned to Los Angeles and joins Angel in his battle against Wolfram & Hart. First he is a ghost, but then he becomes corporal again.

After rescuing a child and destroying several of the senior partners, Spike joins Angel and the others as they prepare to face the Senior Partners. The story from there occurs in the “Buffy” comics (Season 8 and Season 9) and “Angel” comics.