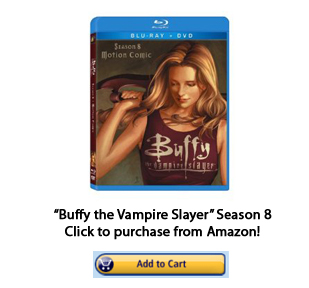 If, like all of us true “Buffy” fans, you want to know what happened to our slayer and the Scoobies after the end of the television series, you can get “Buffy” Season 8 — either in book form or as a motion-comic DVD/blu-ray combination.

First, however, we need to set the scene. The TV shows ends with the slayers (yes, now there is more than one) and the Scoobies destroying the Hellmouth in Sunnydale, and Buffy finally seems happy that she is no longer alone in her role as the slayer. “Buffy” Season 8, then, begins with our heroine taking charge of an army of slayers in an army against the demons and vampires– who, of course, are still waging war against humanity despite the lack of a hellmouth in California.

Buffy’s younger sister, Dawn (whom we met in Season 5), becomes a giant (yes, physically) after a sexual encounter in “Buffy” Season 8, and the U.S. army is now after the Slayer Army because the latter is viewed as a bunch of potential terrorists (the plot seems to reflect on something very similar in Season 4). In addition, one of the sub-plots, named “The Chain,” is about the story of a Buffy decoy who goes underground on an important mission.

The artwork of “Buffy” Season 8, according to most accounts, is not very complex — although, the artists aim to personify the main characters as they were shown by the actors and actresses in the original show. Of course, the thing that longtime fans will enjoy the most is the writing of Joss Whedon — the essentially-worshiped creator of the first movie and TV show — which is still clever, punchy, and guaranteed to being a smile to the face of anyone who enjoys word-play.

Meanwhile, Buffy, her army of slayers, and the Scooby Gang have moved from Sunnydale (which is now, of course, a hole in the ground) to a Scottish castle to manage their legions in the fight against evil. But there’s more: Japanese vampires start to plot an evil plan, and another Big Bad wants to kill every slayer — both new and old — just like in the prior season.

The Events Before “Buffy” Season 8

Before you read the comics, it is crucial to see the video trailer for “Buffy” Season 8: