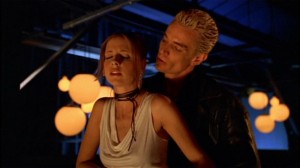 “Dead Things.” The Trio accidentally kill Warren’s ex-girlfriend, Katrina, and then they use magic to get Buffy to believe that she killed her by mistake. Meanwhile, Buffy and Spike continue having violent sex after literally bringing down the house in the prior episode, and Buffy confides in Tara that she thinks something is wrong with her — perhaps physically or metaphysically — because Spike, who cannot harm humans because of a computer chip, can harm Buffy during their “romantic” interludes. Buffy also continues to have a difficult time at her fast-food restaurant job, which she needs to keep her and her sister, Dawn, on their feet. In one of the series’ darkest episodes, Buffy is left crying on Tara’s lap at her condition and romantic indecision. (Original air-date: February 5, 2002)