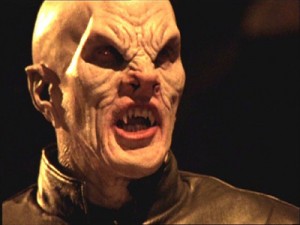 In “Buffy,” The Master (played by Mark Metcalf) was one of the oldest, most-powerful vampires that the slayer had faced.

The human identity and date of the Master’s siring is unknown, but we know that he had been a vampire since the twelfth century. In the early seventeenth century, he posed as a priest to go to the American colony of Virginia, where he sired Darla, a prostitute who was dying of syphilis.

Later, he met Angelus — a vampire whom Darla had sired and who would later become Angel — in a sewer in London. Darla eventually left The Master to travel with her Angelus, who had become her lover and for whom the vampire king had expressed some admiration.

After Darla and Angel had fought after the latter was cursed with a soul, she returned to The Master in Sunnydale, California, to join the order of Aurelius again. The Master had moved to America to open the Hellmouth and bring the end of the world by releasing the Old Ones. However, an earthquake had erupted in the middle of the ritual, swallowing The Master and trapping him inside a mystical prison.

In 1997, The Master tried to escape his prison through his followers during the attempted Harvest, but Buffy, as the current slayer, stopped his plans. In the final battle as depicted in the final of Season 1, Buffy was first hypnotized, defeated, and drowned by The Master, but Xander’s CPR brought her back to life. Then, she found The Master again and threw him threw the skylight above the library of Sunnydale High School, piercing his heart on a spike and killing him.

In the first episode of Season 2, The Master had threatened to return when his followers, including the Anointed One, had tried to do a ritual to bring him back to life. Buffy, Angel, and the Scoobies, however, put a stop to his plans.