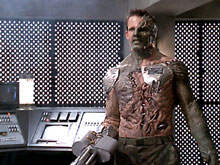 In “Buffy,” Adam was the Big Bad of Season 4 and a creation of the Initiative, a program run by the American military that aimed to create a race of beings that would be unstoppable in the face of human and otherworldly foes.

The Initiative was based in secret facilities underneath the U.C. Sunnydale campus and run by Dr. Maggie Walsh (also a professor at the college and Buffy’s professor) along with chief officer Riley Finn (also her teaching assistant and Buffy’s boyfriend). The Initiative secretly captured vampires and demons and then ran tests on them with the goal of taking relevant parts to create a race of superbeings. Often, they would implant chips in the brains of vampires to render them unable to inflict harm on humans — as what they did to Spike after he was captured.

In the middle of Season 4, Adam — the prototype created by the Initiative — woke up, killed Dr. Walsh, and wandered throughout Sunnydale, hoping to understand his identity and the reason for his existence. After all, he was one-third human, one-third demon, and one-third machine. As a result, he had the powers of all parts combined into one, dangerous entity.

As both the Scoobies and the Initiative tried to rein in Adam, he killed many people before later reanimating them in the season finale. Adam later enlisted Spike, who was still wavering between good and evil, in his ultimate goal: to create a race of beings like himself. The method was to entrap the Initiative’s soldiers in the compound while letting lose all of the captured demons. As a result of the ensuing battle, there would be many human and demon parts from which he could build his army.

Buffy was able to defeat Adam by incorporating magic and uniting with the spirits of the Scoobies — a method in direct contradiction to the rational science that had created Adam. (Willow was the spirit, Giles was the mind, and Xander was the heart the formed the uber-Slayer that killed Adam.) Buffy’s magic allowed her to ignore all of the firepower that Adam had wanted to use, and she killed him by punching into his chest and removing his power-source. But the mystical union had consequences — as the season finale in the next episode revealed.

After the defeat of Adam, the U.S. military ordered that the Initiative be filled with concrete and be forgotten for good — although it made one more appearance in Season 6.