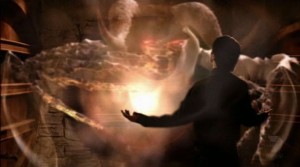 As Giles once put it, “there is evil, and there is the thing that created evil.” That is The First (also known as The First Evil).

The First Evil is an incorporeal entity, meaning it has no physical manifestation — in other words, it is something similar to a ghost that can only communicate and cannot touch anything. The First can take the appearance of anything dead or that has been dead: resurrected humans like Buffy, vampires, humans who have perished, demons who have died, and so on. Its main power is psychological manipulation — when it takes the form of someone or something, it gains access to its memories and experiences. The First Evil’s main assistants are the Bringers — blind, black-cloaked humans with sharp knives who serve its will.

The First Evil made its first appearance in the Season 3 episode “Amends,” when it appeared in the form of the people who Angel had killed as a soulless vampire — including Jenny Calendar — in an effort to drive him insane and kill Buffy.After killing the Bringers, the slayer was able to save him in part because a freak snowstorm had blocked out the sun when Angel was attempting to kill himself rather than harm Buffy.

Later in Season 7, more Bringers begin killing potential slayers throughout the world — and also trying to kill Faith in jail — in an attempt to eliminate the slayer line before they finally kill Buffy so that the world would have no more protector. Near the end of the final season, The First is revealed to have a servant named Caleb, a former murderous priest who imbues himself with The First’s power (see the picture), destroys the Watchers’ Council, and gains enough power to match the slayer’s strength.

At the end of the series, Buffy kills Caleb, the Scoobies kill the remaining Bringers and many of the Ubervamps, and Spike destroys the Hellmouth, Sunnydale, and The First’s remaining forces through a mystical amulet that kills him in the process. Buffy is left with the surviving Scoobies and her army of newly-created slayers — however, the First remains, and will seemingly remain.