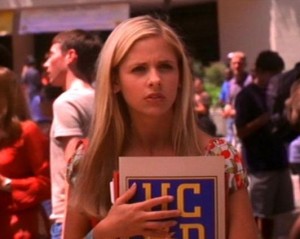 In the first part of this two-part series, we examined how Buffy’s experiences early in her sophomore year at Sunnydale High School in the first season resembled those actions and feelings of freshman high-school students as psychologists, educators, and sociologists see them. Although Buffy was a sophomore, her attitudes and behavior in an entirely-new environment made her just like a freshman in all but name. Here, I would like to examine her transition from Sunnydale High to being a college freshman in the same context.

First, one of the most-important transitions is that which occurs in the relationship between child and parent. After all, the child is now a legal adult, and the parent has less involvement in the child’s day-to-day life. However, this is undeniably a cause of stress. An article on the “freshman blues” in Psychology Today notes:

New York University’s Child Study Center has a wonderful website for college freshmen and their parents that says (among other things) that as parents get used to playing “a new role in their child’s life, they must re-adjust their identity as parents. The goal is to develop an adult-to-adult aspect of the parent-child relationship. Children always need parents, but the relationship may become more peer-like…”

As we see in the Season 4 opener “Freshman,” Buffy returns home after losing a battle with the local vampire-queen Sunday, and she finds that Joyce, her mother, has filled her bedroom with packing crates from her art gallery. Joyce remarks, with a certain degree of nonchalance, that she did not think Buffy would have returned so quickly to visit. Evidently, Joyce had already begun to accept the natural transition.

However, as Psychology today continues to note:

This period of change is a period of growth for parents and all of their children, including those left behind – and growth is almost always accompanied by confusion, doubt and disorganization. A parent’s job at this point is not to make it all better (even if we could) but to help our kids manage these feelings…

Almost every guide written for parents of college students these days agrees with University Parent’s  suggestion that parents cannot and should not do the work of this transition for our youngsters; but we can and should be available to remind them that they have our support and our concern and our love.

Buffy, as we see in the episode, had a much harder time than Joyce. Buffy, bruised and battered, sees the crates, hears her mother say that she did not think she would have come back so soon, and responds, sadly, “Neither did I.” Unfortunately, it seems that Joyce, who had begun to adapt to Buffy’s move to the University of California at Sunnydale, failed to realize that her daughter was in need — despite her obvious, physical injuries at the time.

Second, it is crucial to note how experts see how college freshmen view the differences between high school and college in general — and how they need to be helped. Prof. Drew Appleby of Indiana University writes:

The first stage in this strategy [to help college freshmen] is to bring their attention to the ways in which their college classes and professors are going to be different from their high school classes and teachers. For example, the work in college is harder, there is more of it, it must be completed in shorter period of time, and most of it must be done outside of the school environment… The second stage is to help them identify and value the knowledge, skills, and attitudes (KSAs) they will need to adapt to their new academic environment… The third stage is to engage them in assignments and activities designed to develop or strengthen these KSAs.

At the beginning, it is clear that Buffy has an idea about the difference in academic expectations. As this exchange with Willow during course selection early in the episode reveals:

— “‘Introduction to the Modern Novel.’ I’m guessing I’d probably have to read the modern novel.”
— “Maybe more than one.”

Then, Buffy selects a course on popular culture, thinking that it will be an easy alternative. However, when she is caught asking an innocent question of another student during the initial lecture, the professor calls her “blond girl,” says she is “sucking” the air out of the classroom, and kicks her out of class. Buffy, dejected, half-heartedly tells him, “I didn’t mean to… suck.” Later, in her freshman psychology course, Professor Walsh intimidates Buffy (and, presumably, everyone other student in the class) by referring to herself  as the “evil bitch-monster of death” and then saying that she talks fast, assigns a lot of work, and expects people to keep up.

Buffy’s unease at the rigor of the standards in college even arose when she and Willow first saw the UC-Sunnydale library and contrasted it to the library at Sunnydale High. Willow, after being “sushed” on their initial tour, says to the slayer, “See! We even have to whisper. It’s a whole new world!” Buffy’s non-verbal cues in response reveal that she is less than excited about this “new world.”

In contrast to my earlier analysis of Buffy’s teachers and principals in high school, the slayer’s professor’s at UC-Sunnydale were far less supportive of her. Buffy’s high-school superiors, in my opinion, understandably (since they did not know her “extra-cirricular” activities) viewed her as an at-risk student who needed structure and discipline in order to succeed. However, Buffy’s college professors initially provided her with nothing positive of the sort (in terms of what Prof. Appleby states that college freshmen need).

However, there is far more to the transition into college than familial relations and classwork. The most-important factor in a college freshman’s development, perhaps, is the degree to which he or she can maintain existing or develop new friendships. WikiHow offers some advice on doing exactly that:

(Other articles are here and here.) Needless to say, Buffy did few of these things. While walking in the middle of campus, she receives party invites, people who want her to protest the cause-of-the-week, and religious missionaries, among others — and she dismisses all of them. Moreover, she is separated from her orientation group and is a little lost. Buffy never participates in sports or any other club — except for the occasional party. She never gains a part-time job until Season 6, she never enrolls in elective classes that interest her personally (as far as we see), and there is no campus “downtown” for her to visit unless one counts the bar at which Xander briefly bartends. Her Psychology TA, Riley, does not even bother to remember her name at first (but remembers Willow).

As such, it can be said that Buffy transitions into college, in standard psychological terms, less easily than she did into her first year at Sunnydale High. She has less support from professors, friends, and mentors (as Season 4 later reveals in terms of intra-Scoobie stress), and Buffy is barely active in what can be termed a normal, college life (of course, I am not counting the Initiative). This exchange between Xander and Buffy at the end of the first episode of Season 4 may be heartening, but when viewed in this context, it is not entirely accurate:

Xander: “So, college’s not so scary, after all?”
Buffy: “It’s turning out to be a lot like high school. I think I can handle.”

Of course, the larger point may have been “tough love” in that the university system, like Giles himself during this year, aims to treat new freshman at the start as full-fledged adults to push them to become as independent as possible. Still, it remains to be seen — whether in the real world or in a fictional one like “Buffy the Vampire Slayer” — whether this is a good route to take.