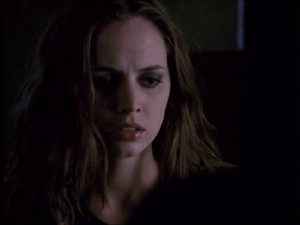 The five stages of grief (known in academics as the Kubler-Ross Model) are fairly well-known, and they have often been used in television dramas within an episode or multiple-episode arc. “Buffy the Vampire Slayer” is no exception. The experiences and action of Faith — a so-called “rogue” vampire slayer who was portrayed by Eliza Dushku — from “Buffy” Season 3 and 4 to “Angel” Season 1 show that creator Joss Whedon, Dushku, and his team of writers surely used the model as the inspiration for the complex character’s change and growth from an off-kilter teenage girl to a mature young woman who voluntarily surrenders herself to the police to atone for her misdeeds over a year.

1. Denial. In the Season 3 episode “Bad Girls,” Faith accidentally kills the deputy mayor of Sunnydale by staking him through the heart. He had seemingly “come of of nowhere” while Faith and Buffy were methodically slaying vampires in assembly-line fashion, one by one. See the episode:

The dialogue between Buffy and Faith demonstrates the latter’s state of denial after the initial shock of her (involuntary) deed. Here are the relevant excerpts:

2. Anger. In the following episode (“Consequences”), we see Faith entering the second stage of grief over her action — anger — in an increasingly-strong way:

First, Faith makes comments to Buffy that reveal, particularly in her tone of voice, a surge of inherent anger on her part:

Later, Faith’ makes comments to the detective investigating the killing of the deputy mayor that are as aggressive as they are disrespectful. Then, she tries to get Giles to blame Buffy in a way that combines both her anger and her denial in the early parts of the five stages of grief. See this dialogue between Buffy and Giles afterward:

Eventually in the same episode, Faith tries to kill Xander after he tries to help her, she attacks Wesley and the other Watchers’ Council members who try to take her away to England, and then she slays Mr. Trick when he and his cohort of vampires attack the two slayers. Faith, of course, eventually joins the mayor in his plot to ascend and become a demon, and all of her violent actions in Seasons 3 and 4 can be sourced to her inner anger at her killing of the deputy mayor.

3. Bargaining. After awaking from her coma in “Buffy” Season 4, temporarily taking over Buffy’s body, sleeping with Buffy’s boyfriend Riley, saving innocent churchgoers from a team of vampires, and then starting to remember her humanity, Faith takes a bus to Los Angeles. The resulting plot is detailed in a two-episode arc in “Angel” Season 1, and the first is “Five by Five”:

Throughout the episode, Faith does actions that can be described as a “murderous calling-card” — she wants Angel to find her, in other words, for reasons that shortly become apparent. She attacks a man near the bus stop, agrees to kill Angel in exchange for money from the evil law-firm Wolfram & Hart, provokes Angel in two initial confrontations involving a crossbow and gun-play, assaults Cordelia, and then kidnaps and tortures Wesley.

Normally, such actions could be described merely as evil deeds done by an evil person. But, in “Five-by-Five,” one scene shows the deeper subtext. After a round of torturing Wesley, Faith sits on a windowsill, playing with a piece of bloody glass, and stares longingly into the empty, night space. Her body language clearly communicates that she wants someone to come and that he has yet to arrive — and that person, as viewers know, is Angel himself.

When Angel does appear, Faith’s immediate response is, “About time, soul boy. Ready to play now (emphasis added)?” She had clearly waited for him. After they begin fighting, Angel tells her in a knowing fashion, “You think I don’t know what you’re after? I do.” Faith seems to gain the upper-hand in the fight and then yells at him, “You can’t take me… no one can take me!” Faith is separating herself from the world and humanity for a reason that is shortly revealed.

However, as the episode reveals, Angel was not fighting to win. Sensing an impending victory, Faith exclaims, “You don’t know what evil is… I’m bad!” She tells him, “Fight back!” Angel responds, “I know what you want, and I’m not going to do it. I’m not going to make it easier on you.”

And at this point at the end of the episode, we see Faith finally entering stage three of the grieving process. After starting with denial and anger a television season earlier, she then enters the bargaining phase with this phrase: “I’m evil… I’m bad… do you hear me? I’m bad… Angel, please, just kill me. Just do it…” Faith is bargaining with Angel to kill her to end the pain of her trauma and grieving (and everything she had done in this episode, in my view, was done to provoke him to do exactly that). And then, when he refuses, she collapses in his arms in the rain in the turning-point of her psychological healing: 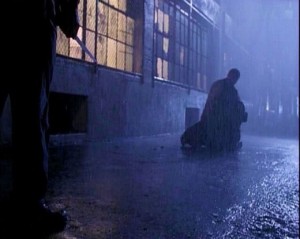 4. Depression. The final episode of the “Angel” Season 1 two-parter is “Sanctuary,” and it opens with Angel and Faith riding down an elevator at the vampire’s mansion:

Faith is quiet, sullen, and pale. She goes to Angel’s bed, holds herself, and is then wrapped in blankets that the vampire had given her. When Angel tells her, “You rest now; I’ll be close,” she is stoic and does not respond. The following morning, she does take any of the doughnuts offered by Angel, and all she eats later is a bowl of popcorn. (A lack of appetite is a symptom of depression.)

Then, when Faith tries to leave, we see the following dialogue:

In addition, other comments by Faith reveal her inner depression at all of her actions over the past year:

5. Acceptance. While dealing with her depression and long-standing grief, Buffy and a team from the Watchers’ Council both arrive in Los Angeles separately, looking for for Faith (for different reasons). The L.A. police department is also searching for her after her earlier assaults and the outstanding warrant from Sunnydale.

After talking with Buffy and hiding from the Watchers’ Council’s assassins, Faith disappears. Then, after the battle has ended, we see later that she is sitting in the police department in handcuffs. With one sentence, Faith finally accepts both what had happened to her and the pain and suffering that she had caused to those who had tried to help her: “I’d like to make a confession.”

At the end of the episode, Wesley tells Angel that he did the right thing in trying to help Faith, who will sit in a jail cell until several seasons later, even after all she had done. (Wesley later helps Faith to escape after Angel turns evil, and then she returns to Sunnydale to help Buffy in Season 7 of that show.) Angel responds: 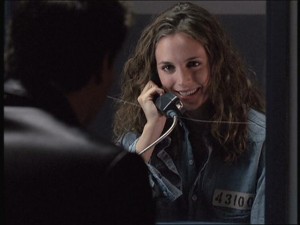 Faith’s journey in “Buffy” Season 3 and 4 and “Angel” Season 1 is less about the plot and more about character development. It is a testament to the creativity of Whedon and his team — as well as Dushku’s ability as an actress — that they were able to take a standard plot-device and turn it into something completely original, new, and dramatic over a year spent in Faith’s five-step grieving process.