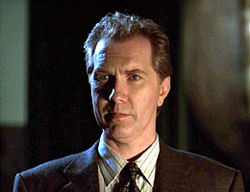 Authority, for lack of a better phrase, can be defined as that which makes one or more demands on an individual, group, or society (regardless of whether the recipient in question voluntarily recognizes the authority’s position). In other words, it is someone who orders someone else — individually or collectively — to do something. Whether and how the respondent reacts is always a complex question and observation in any social, business, or political context.

Within a person’s life, there are generally four types of authority that present themselves, generally in this chronological order of life experience: parents; teachers, principals, and professors; bosses at work; and civil authorities including the police, military, and government. Within the so-called “Buffyverse,” the slayer and her group of friends/comrades-in-arms receive demands from these types of authorities, and their reactions reveal the complex ways in which this fictional world views “authority” both in general and in the specific context of each of the four examples that I have described. Moreover, it further describes the role of the individual compared to general society within “Buffy the Vampire Slayer” — and how people should behave in that context.

Most writing on the topic of “authority” in “Buffy” has spanned two extremes. Daniel A. Clark and P. Andrew Miller argued in the online journal “Slayage” that the program, like many youth shows, is essentially anti-authoritarian:

The relevance that [authority] figures have to Buffy and the Scooby Gang has shifted throughout the course of the show’s five seasons, and no doubt that will continue… BtVS is about young heroes with little or no socially constructed authority struggling against all of the various authorities to which they are subject.

Neal King, in contrast, wrote in a chapter of “Buffy the Vampire Slayer and Philosophy: Fear and Trembling in Sunnydale” that the program contains elitist, “proto-fascist elements” that, when taken to their logical extremes, would set the slayer (and perhaps her friends) above civil authority. He continued:

A fascist movement “features spectacular celebration of its combat and heroes, aggression against a racially-inferior foe, and authority derived from an ancient order [my note: as opposed to a present-day, civil order]… The Buffyverse already sports these philosophical and symbolic elements of fascism, but lacks the national movement and focus on the state that would bolster Buffy’s death-squad patrolling…”

What I am arguing is that “Buffy the Vampire Slayer” straddles the middle ground between these viewpoints. The actions of the main characters in response to directives from worldly authority figures — here, I am not discussing otherworldly ones like gods, demon leaders, and the Watchers’ Council — are largely dependent on the specific context, and there are general themes in this regard that are always present. Sometimes Buffy and the Scoobies adhere to authority; sometimes they ignore it. (To be precise, I am not taking into account the general attitude of the protagonists towards authority figures in and of themselves, only their specific responses to directives from them. After all, Buffy would often denigrate Principal Snyder — though usually not to his face — but still follow his commands.) First, we need to explore the situations in which the main characters find themselves being ordered by authority figures.

Is Buffy’s World Anti-Authoritarian or Fascist?

I. Family. We observe the relationship between individuals and the directives of their parents based on a few limited contexts: mainly, Buffy and her mother (Seasons 1 to 3) along with Willow (Season 2 and 3) as well as Tara and her family in one episode (Season 5). In the context of how the characters respond to authority, we generally see that Buffy only ignores a command from her mother (as in the second part of the two-part series opener entitled “Welcome to the Hellmouth” and “The Harvest” as well as the finale of Season 2) when it is necessary to save the world. (In high-school instances in which the world is not in peril, for example, Buffy grudgingly goes to her room when instructed to do so as a punishment.) Willow, she says in Season 2, is directed by her parents not to watch “A Charlie Brown Christmas Special” because she is Jewish, but she states that she has gone to Xander’s house to do so in the past. In addition, she later nails crucifixes that season to her bedroom wall to protect against an evil Angelus while saying that she knows her father would disapprove. In Season 5, we learn that Tara’s family had forbade her from practicing witchcraft, but she had continued to do so. (We never learn the feelings of Willow’s family in normal circumstances — in a Season 3 episode in which they tried to burn her at the stake, they were under the spell of a demon.)

In general, the main characters in the Buffyverse ignore or dismiss familial directives only when the world (or their lives) needs saving or when the commands conflict with fundamental (usually religious and/or spiritual) characteristics of their personas.

II. Teachers, Principals, and Professors. Likewise, Buffy and her friends nearly always submit to worldly educational authorities when it comes to earthly matters. When a biology teacher tells Buffy early in Season 1 to apply herself because he recognizes her inherent ability, she duly agrees. Buffy (and her friends as well, depending on the context) agrees to perform in a high-school talent show and help decorate for parent-teacher night at the firm “request” of Principal Snyder. Willow agrees to help teacher Jenny Calendar as a substitute teacher in Season 2 even after everyone knows of her betrayal (“she is a teacher,” Willow tells her friends). (The only person who is rude to Jenny is Buffy, who, given the metaphysical circumstances, perhaps has every reason to behave as such.) When a rude college-professor orders freshman Buffy out of his classroom, she quickly complies. The only times that the Scoobies go against their educational authority-figures — and I am not including watchers in this context — is when they turn out to be otherworldly foes including a giant insect (Season 1) or a coach who breeds mutant-fish swimmers (Season 2). The only time that Buffy directly defies an order by Principal Snyder is when Spike attacks parent-teacher day (Season 2), Synder orders a trapped party to escape through a window, and Buffy overrules him. When Principal Snyder initially forbids Buffy from re-entering school early in Season 3, Buffy and her mother say that they will take the issue “to the mayor” — or, in other words, pursing civil appeals rather than resorting to other means. (It is Giles who secures her re-entry by threatening to make Snyder’s life difficult — “professionally speaking.”)

In general, the main characters in the Buffyverse always adhere to directives given by educational authorities in the context of worldly concerns except when it comes down to saving lives.

III. Bosses at Work. Admittedly, little screen-time is given to the Scoobies in the context of their later work-lives. But what we do see is (perhaps surprisingly) very typical of the “real world.” Xander, in his various part-time jobs and later as a construction worker and then foreman, seems duly respectful of the chain of command whether he is applying for a construction job (in the beginning of Season 5) or managing a workforce (early in Season 7). When Buffy briefly works at the Doublemeat Palace, she follows orders — no matter how distasteful (and no pun intended). She only interacts negatively, shall we say, with a customer when she turns out to be a demon.

In general, the main characters in the Buffyverse almost always, if not always, adhere to directives given by workplace authorities in the context of worldly concerns except when it comes down to saving lives.

IV. Civil Authorities Including the Police, Military, and Government. Buffy interacts directly with the police in Seasons 2 and 3 — when she thinks that she mistakenly killed her mother’s boyfriend (who turned out to be a psychotic robot) and after Faith accidentally killed the deputy mayor while accompanied by the slayer. In each case, Buffy voluntarily submitted to the civil authorities for questioning and, if it would be decided, due punishment. (Still, it must be stated that Buffy did lie to the police in the latter situation about her whereabouts. And Buffy only acted in uncivil manner, as with attacking police officers while in their cruiser, while on a temporary, action-fueled high with Faith.) In Season 4, Buffy gladly joins the Initiative and even expresses appreciation for their methods and efficiency. She only turns against them when she realizes their other-worldly plans and is then a victim of an assassination (murder?) attempt. In fact, the Scoobies turned against the most-visible symbol of civil authority — the mayor in Season 3 — only after they realized his evil, murderous plot.

In general, the characters in the Buffyverse adhere to civil authority except when it comes down to protecting the world and saving individual lives.

In contrast to Clark and Miller’s view, a brief overview of the responses of the Scoobies to various authorities reveals that the heroes are generally respectful of authority in worldly matters — they are not “struggling against all of the various authorities to which they are subject.” In sum, they are actually conservative in attitude — and I mean the term in the context of the anarchical-conservative cultural spectrum, not the liberal-conservative political one. This attitude is befitting of how most young people, like those portrayed in the show, behave. Except in the cases of the most-severe juvenile delinquents, most teenagers and college students do respect authority.

The only times that the characters disregard authority are when the world (or their lives) needs saving or when the commands conflict with their deeply-held spiritual beliefs. When viewed in the light of the real world in which we actually live, this seems strikingly similar to our  — we adults’ — everyday lives. “Buffy,” then, is, perhaps surprisingly, not as anti-authoritarian as most so-called “teenager shows” — like “That ’70s Show,” which debuted at roughly the same time.

However, the (what can be termed) pro-authoritarian view of the Scoobies does not rise — even potentially, as described by King — to the level of “proto-fascist.” The slayer and her friends do not use an “authority derived from an ancient order” to claim universal superiority over all aspects of life both worldly and otherworldly. Quite the contrary. Buffy and the others defer to worldly authorities in regards to worldly issues; they only take unilateral action on supernatural issues.

This dichotomy should not be surprising, given Buffy’s often-stated desire for a “normal life.” After all, her major internal-conflict was between Buffy-the-girl and Buffy-the-superhero. As a result, the show’s view of authority lies somewhere between those two extremes.