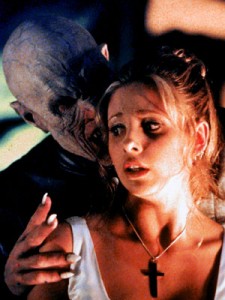 The fact that “Buffy the Vampire Slayer” was regularly criticized by conservative Christians during its seven-year run is nothing new. The Parents’ Television Council generally viewed the program as one that presents the occult in a positive light while showing what the organization viewed as explicit sex and violence in the early-evening viewing hour (when children are watching). In addition, the PTC named “Buffy” Seasons 4, 5, and 6 and as the fourth-worst, third-worst, and worst family-friendly television show in their respective years. A complaint filed by the organization with the Federal Communications Commission during Season 6 was rejected.

However, one complaint — in the Christian point of view — that has been rarely addressed was the fact that the (fictional, of course) mythology of the so-called “Buffyverse” seems to contradict that of Christianity, particularly evangelical Christian points of view that interpret the Bible literally. In 2005, Maurice Broaddus — after praising the show’s writing, acting, and wit along with its plots that involve the characters facing the consequences of their (sinful, in Christian thought) actions — wrote at Hollywood Jesus that the mythology of “Buffy the Vampire Slayer” is “not a Christian version of creation.” However, a deeper examination of the Creation myth — by which I mean an “allegorical story that conveys meaning regardless of whether it is true,” not “false story” — in Judaism, the antecedent of and inspiration for Christianity, reveals that statements like those of Broaddus are not exactly accurate.

In the second part of the double-episode introduction (“Welcome to the Hellmouth” and “The Harvest”) of Season 1, Rupert Giles — Buffy’s “watcher,” a mentor, trainer, and guide, who also happens to be the high-school librarian — tells the slayer and her new circle of friends:

This world is older than any of you know. Contrary to popular mythology, it did not begin as a paradise. For untold eons demons walked the Earth. They made it their home, their… their Hell. But in time they lost their purchase on this reality. The way was made for mortal animals, for, for man. All that remains of the old ones are vestiges, certain magics, certain creatures…

The books tell the last demon to leave this reality fed off a human, mixed their blood. He was a human form possessed, infected by the demon’s soul. He bit another, and another, and so they walk the Earth, feeding… Killing some, mixing their blood with others to make more of their kind. Waiting for the animals to die out, and the old ones to return. (source)

As is typical for a television show that is just finding its way, this introduction is (perhaps purposely) vague and uses the passive voice to give the show a wide degree of latitude for future plot developments. Giles does not tell how the earth was created, from where the demons came, what they were doing on earth, how humanity defeated them, or why they left. Later in the “Angel” spin-off, the story becomes a little clearer:

Earth was originally ruled by these huge, powerful, pure-breed demons [the “Old Ones” originally described by Giles], and the demon races that exist on Earth today are hybridized with humans and other species. Anya, although far too young to have seen an original Old One, had previously witnessed an Ascension.

The Old Ones possess many different shapes and powers, but all of them are gigantic. They were worshipped as gods (according to Illyria, she was a “god to a god”), ruled over vast territories, commanded fearsome armies, and constantly made war against each other. They also did not seem to live and die the way mortals do. Illyria claimed she lived seven lives at once, and even after her death, releasing her essence from the sarcophagus was enough to resurrect her into the nearest host. In short, under the Old Ones’ rule, the world was a living hell.

At some point, the Old Ones lost their claim over this reality; some were killed while others were driven from this dimension… (source)

In short, the earth before what can be termed, in “Buffy” mythology, the “Age of Man” was an anarchic place full of fighting between hugely-powerful, pure-breed demons and, we presume, their demon armies for “eons.” Humans did exist for at least part of this time (since “the last demon to leave this reality fed off a human”), although nothing in the “Buffy” canon states their collective role and condition. Nothing else is known (at least not thus far).

Buffy vs. The Bible and Talmud

The well-known account of Creation in Genesis 1, simply put, describes how God created the universe seemingly ex nihilo (“out of nothing”) in an orderly, step-by-step process over six days and then pronounced everything to be “good.” Seemingly, as Giles said, everything did “begin as a paradise.”

However, various sources in Judaism — which has obviously influenced Christianity since the latter’s birth two thousand years ago — state that the presumed interpretation of the first chapter of the Bible is not as simplistic as most believe, and the Buffyverse may operate logically within what can be termed the “Christian view of creation” as a result.

First, it is acceptable, even in many conservative Christian and Jewish circles, to believe that the universe is older than 6,000 years and that Adam was not the first human (first source, second source):

The Hebrew Bible also contains various references to “things” that, depending on the specific instance and one’s interpretation, may be references to other ancient Middle Eastern gods, angels, demons, Satan, mythological beasts, or something else:

In the biblical worldview, then, there are additional powerful, other-worldly beings besides God (whether they are good or evil is not my point to discuss here).

So, as a result, it is clear that the Creation myth of the so-called “Buffyverse” and the Bible do not contradict each other. In Joss Whedon’s world and in much Judeo-Christian thought (though perhaps as a significant minority), the world existed in some shape or form for “eons” before the present, so-called “Age of Man.” The biblical view that the pre-Creation world was “formless and void” (Genesis 1:1) — some interpretations say “chaos and void” (emphasis added) — could be used to describe the domain of the planet under the role of the Old Ones whom Giles and other have described since the argument could be made that untold eons could have separated the “days” of Creation in the Bible. The fact that mythological beasts and divine beings other than God exist before and after Creation could also refer to the Old Ones or the lesser demons who replaced them.

For these reasons, writers like Broaddus, with all due respect, are not correct when they say that the mythology of “Buffy the Vampire Slayer” is “not a Christian version of creation.”